A German employment contract – here’s what you need to know about it!

Conclusion of an employment contract in Germany

There are basically three options for concluding an employment contract in Germany:

A fixed-term contract must always be concluded in writing in accordance with § 14 Abs. TzBfG.

We therefore recommend that you enter into every contract in writing and in as much detail as possible, in order to avoid unnecessary annoyances in the future. According to the German Evidence Act (Nachweisgesetz) the employer is obligated to put certain terms and conditions of employment in writing.

The following employment contracts are not permitted in Germany:

In addition, the following contracts are also considered invalid in Germany:

What information must a German employment contract contain?

Working hours (Arbeitszeit): Regular weekly working hours have to be included in the employment contract. In most German companies 35 or 40 working hours per week are common practice. According to the Working Hours Act the daily working hours can only exceed 8 hours in exceptional cases.

Salary (Gehalt): The gross salary is stated as a monthly or annual salary. In addition to the basic salary, performance-related benefits such as bonuses and premiums may also be included. Unless regulated otherwise, your salary must be paid into your account on the last working day of each month at the latest.

Sickness (Krankheit): It is sufficient for your contract to include a reference to the “Entgeltfortzahlungsgesetz” (Law on Incapacity for Work). This law states that the employee must give notice of his illness as soon as possible (preferably first thing in the morning at work) and that the employer is obligated to pay wages to the sick employee for six weeks (if the illness lasts that long). A contractual deviation from this rule is only possible to the employee’s advantage, for example, if the tariff agreement provides for a longer payment period than the statutory one.

Notice of termination (Kündigung): A German employment contract stipulates when both parties can terminate an employment relationship. After the probationary period it is four weeks until the 15th or until the last working day of the calendar month unless otherwise specified. A reference to the Kündigungsschutzgesetz (Law on the Protection of Employees against Unjustified Termination of Employment) is sufficient. Sometimes longer notice periods are also stipulated, for example at the end of a quarter.

Additional work (Nebentätigkeit): The employer may require in the contract that the employee gives information about possible additional work. It is generally possible to work elsewhere at the same time – on days off, during vacations, or in the evenings.

Obligation of secrecy (Schweigepflicht): Even if this point is not separately mentioned in the contract, you are nevertheless obligated to maintain secrecy as an employee and not to disclose internal company secrets.

Occupation (Tätigkeit): The job description and position should be included as precisely as possible in the employment contract. If the wording is very general, there is a high probability that your duties will include tasks that you have not considered at all.

Overtime (Überstunden): Sometimes you are contractually obliged to perform overtime if it is not possible to do the work in the standard time. However, the question of overtime pay should be clarified: will you be paid for it and how much? Will they be compensated with days off?

Vacations (Urlaub): According to the law governing vacations, employees are entitled to 20 days of vacation per year if they work 5 days a week (if they work 6 days, they are entitled to 24 days of vacation). In tariff agreements, even more vacation days are often stipulated. It is also possible to agree on more vacations in a standard employment contract. If, on the other hand, the contract states that you have fewer vacation days than the statutory vacation entitlement, the clause is void – even if both parties have signed it.

Breaking the contract (Vertragsbruch): What happens if an employee breaks the contract, for example if he decides to take another job just before starting work? This should be stated in the employment contract. Usually, a financial penalty in the amount of salary is applied, until the end of the notice period. If you do not terminate your contract in writing, the employment court will decide what the consequences will be.

Non-compete (Wettbewerbsverbot): An employee may not compete with his/her employer as long as the employment relationship between them continues.

Here is a sample of an employment contract in German: 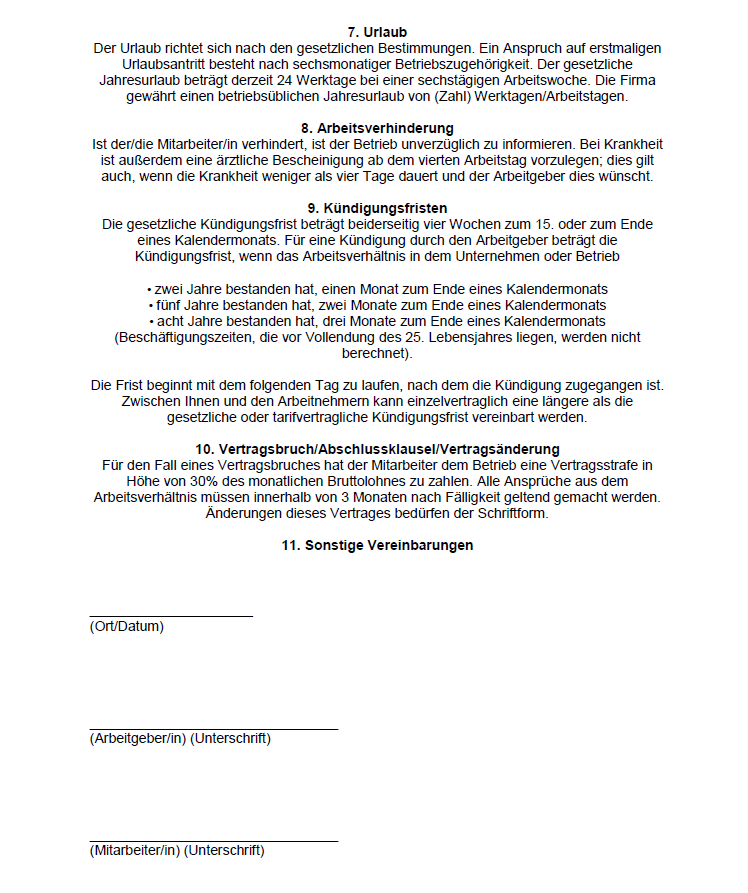 When can the police in Germany search an apartment and who decides?

Germany: Find out what the maximum workplace temperature is!

Covidien restrictions in Germany have been largely lifted, and for many German citizens, this is the first summer since...